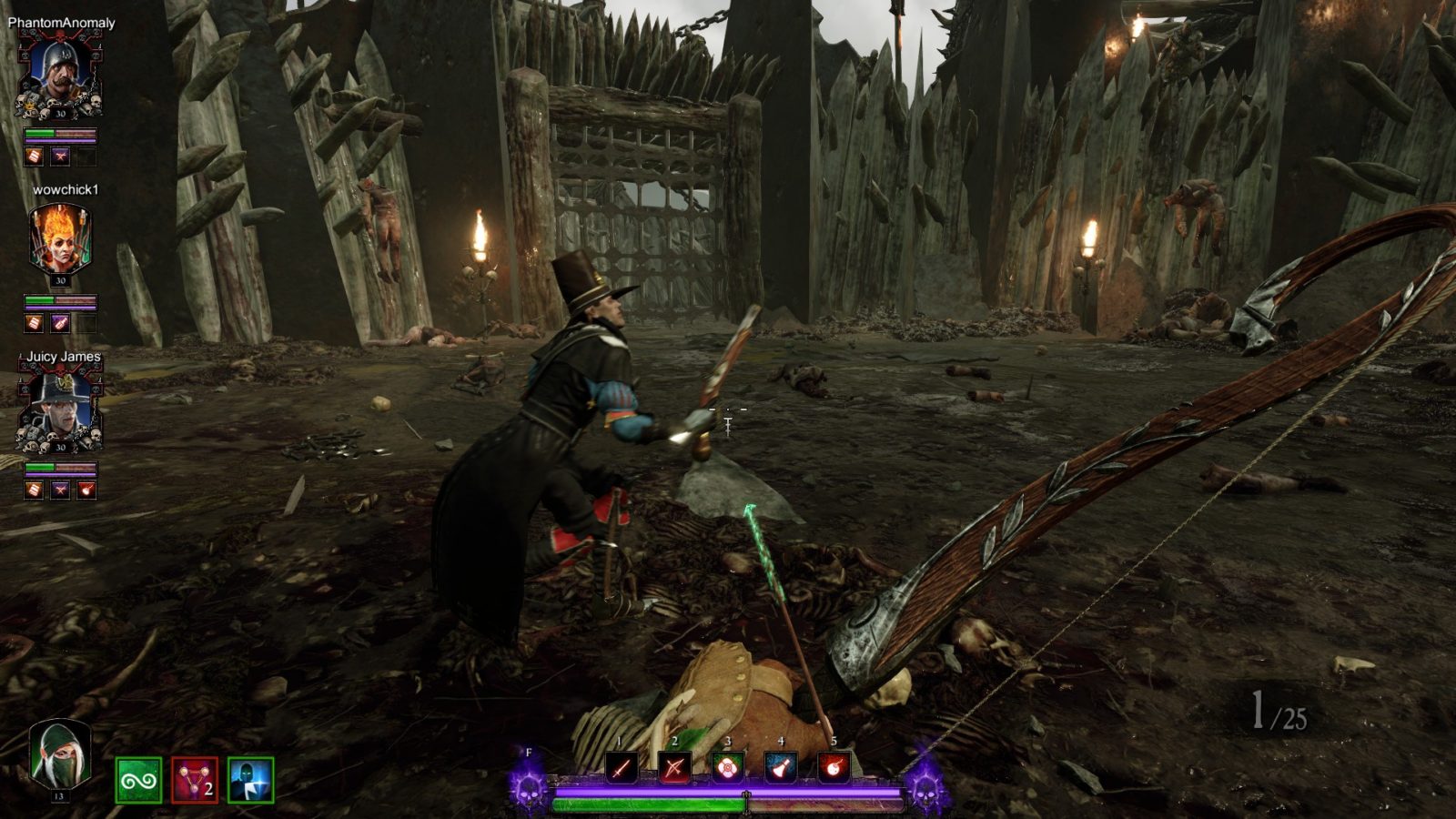 After a few days coding without playing a game, I played: Vermintide 2.

Vermintide 2 strikes an odd balance. At its core, it’s Left 4 Dead except with rat creatures and cultists: You play through a static level, items are scattered around through procedural generation, hordes of disposable enemies routinely rush to kill you, and special enemies sometimes show up to cause even more chaos. You play through a few events – such as rolling a cart full of explosives into a mansion – and then reach the exit. Rinse, repeat.

But where Left 4 Dead is content to have no progression at all, Vermintide 2 takes the Destiny 2 approach. All characters have a pool of subclasses, talents, and abilities which you earn as you advance that character’s level, and gear has both “Power rating” and other perks and stat bonuses. Itemizing your character is no longer done on the fly, like picking up a new rifle or fire ammo in Left 4 Dead; after every Vermintide 2 mission, you come back to your home base and fiddle with your equipment until you are satisfied and ready for another run.

To add to the challenge, you can collect tomes and grimoires scattered throughout each map. A tome takes up your healing item slot and can be freely swapped, and a grimoire takes up your buff potion slot and reduces your entire team’s health pool by 1/3rd. Successfully completing a mission with these items in your party’s inventory is difficult – more the grimoires than the tomes, as dying will destroy the grimoire you carry and the health penalty is no joke – but they give you an XP bonus and increase the rarity of the loot chest you get for completing the mission, so it’s usually worth it.

What makes Vermintide 2 feel odd is that equipment itemization determines what difficulty you can play at, because all characters have the aforementioned “Power” stat, which directly affects their damage, cleave strength, and other stats. While that’s par for the course in games these days – looking at you, Destiny 2 – it conflicts with Vermintide’s inspiration and static structure. Left 4 Dead’s higher difficulties were tough, but fair: If you knew how to play the game, you could jump straight in at the hardest difficulty and have a blast. But Vermintide 2 directly blocks you from participating in higher difficulties until you’ve gathered enough high-power gear, which traps you in a kiddie pool for a solid few hours – usually until you’re about character level 10. You either grind until you can play normally, or have some friends carry you.

While this isn’t a bad system for funneling more experienced players into harder difficulties while providing them with a solid reward structure, it also directly fucks over new players. The first few hours of Vermintide 2 – when you have no decent weapons, no perks, nothing but your class ability and some garbage – are awful. You die constantly, nothing makes sense, the enemies are stupid difficult, and you’re faced with a steep grind to level it out. While that grind gradually gets easier, and the game eventually opens up, you had to climb through muck to get beyond it, which colors your experience of the rest of the game.

Playing Vermintide 2 reinforced one of my existing beliefs: We need more horizontal progression systems. Relying on arbitrarily increasing damage numbers is not a solid way to build a fun and inviting multiplayer experience. Horizontal progression – weapons that all deal the same damage but which have different perks, for example – is far more rewarding. Synergizing effects to deal with challenges is a wonderfully satisfying player experience, and it emphasizes encounters as puzzles more than gear checks, which deepens player engagement with regards to learning and mastering content.

Games don’t have to be number grinds. Leave that to Cookie Clicker.